Longtime Dayton Contemporary Dance Company dancer Sheri “Sparkle” Williams is the 2017 recipient of the OhioDance Award for Outstanding Contributions to the Advancement of the Dance Art Form.

The award recognizes choreographers and dance artists dedicated to both the creation of new work and the preservation of dance history. Williams will receive the award on stage Saturday, April 29 at the BalletMet Performance Space in Columbus during the 2017 OhioDance Festival. 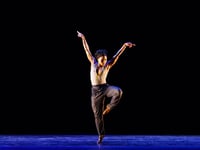 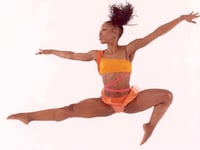 Williams has been dancing with the Dayton Contemporary Dance Company for 43 years. The award is well-earned, DCDC Artistic Director Debbie Blunden-Diggs said.

“Anybody who has been able to sustain a career like Sheri — it’s amazing and long overdue,” Blunden-Diggs said.

A Dayton native, Williams began dancing at age nine when she followed her best friend, Thelma, to a ballet class taught by DCDC founder Jeraldyne Blunden. Within two weeks, Williams was taking all the classes Jeraldyne offered.

“I liked moving, the flow, learning to use the body differently,” Williams recalled. “In little old Dayton, Jeraldyne made it happen, and we ate it up.”

The dance performances that most impacted her were Ulysses Dove’s Vespers, now a modern classic, and Dwight Rhoden’s Growth, a solo work that was originally choreographed for a man but has since been performed internationally by Williams.

In 2012, Williams was the subject of the documentary film “Sparkle,” which followed her recovery from an onstage hip injury that nearly ended her dance career. The documentary won the Audience Award at the AFI SilverDocs Film Festival.

Throughout her career, Williams has picked up numerous other accolades, including a coveted New York Dance & Performance Award (the Bessie) in 2002 and the Ohio Arts Council’s Individual Artist Award in 2014.

“I’ve been lucky to nurture audiences through the years, right here at home,” Williams said. “Anytime someone even thinks I should be the recipient of an award — I’m honored.”

Former dancers return to stage for ONE NIGHT ONLY!