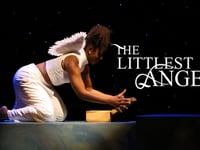 The second work in the company’s 2017-18 Lineage season, DCDC dancers will use movement to translate Charles Tazewell’s words about heaven’s youngest member and the joyful and giving spirit of the holiday season.

“I think it’s one of the most beautifully put together evenings of dance that tells a story,” Blunden-Diggs said. “The music she selected, the movement vocabulary inspired by words within the story — it’s really stunning.”

“The ideas of tradition and heritage and culture are important,” Michelle said. “To hear feedback from people that something I created has become something people expect to do during the holidays with their loved ones — that The Littlest Angel is special in their life is special to me.”

Purchase tickets to the family show here or by calling the Ticket Center Stage box office at 937-228-3630.

Prorated season subscriptions are also available. These packages include tickets to the holiday show The Littlest Angel; the one-night-only Reunited, which will feature former DCDC dancers onstage with current company members to kick off DCDC’s 50th anniversary celebration; Transparency, an autobiographical collaboration between DCDC’s preprofessional company and University of Dayton’s Dance Ensemble; and Street Beats, an outdoor concert that will be danced in Dayton’s Courthouse Square.