“Monday morning she died in my arms, I was holding her when she took the last breath…I wanted to know had I made her proud, she said ‘absolutely’”

It was a mundane Wednesday afternoon in the sweltering heat of late July when I sat with the esteemed Sheri “Sparkle” Williams. Sheri, who retired from performing just two years ago, is the longest standing member of the Dayton Contemporary Dance Company, having performed for 46 seasons. She is a Bessie award-winning artist, an original member of the Complexions Contemporary Ballet company, a fitness savant, an inspiration to artists from all walks of life, and fortunately for me someone I call friend. 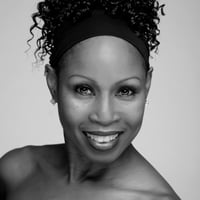 She agreed to sit with me and discuss her trajectory with DCDC and the memories she has gathered along the way. Having set up our meeting in the newly renovated archive space, I found myself marveling at the serendipity of sitting with an elder whilst surrounded by ancestors in a space dedicated to protecting and preserving them. In retrospect I believe it was that particular combination of elements that set the stage for the rich discourse we shared.

We talked and mostly laughed in that room for just a little over an hour, what started as a simple conversation quickly became something liminal. When asked about her tenure and how she has seen the company change over time, Sheri had this to say,

“It's been a ride and a wonderful one, from the beginning. We were a younger company of course, [but] I can still liken the work that we did then to the work we do now. It’s as demanding and Jeraldyne expected the excellence that she was bestowing upon everyone to continue; that has from early on to now. With our current leadership, with Debbie, you know it hasn't dropped one iota, so It’s been a journey of studying, learning and blossoming.

At an early age, even before I graduated high school, I was working with people who were legends in the field of modern dance and not really knowing the breadth of that.

When I think about those things as I was growing older, [ I ] realize this was more than just choreography and dancing...It’s been something of pride for me. As I grew older and became a woman…in this environment, I had wonderful leadership from my parents but then I also had leadership outside the home. So I had no choice but to succeed. I could not allow myself to disappoint, I always wanted to represent those who put so much into me proudly, and I still do.

What has remained constant is that the dancers have never faltered…Dayton Contemporary Dance Company is a place where people can flourish if you allow yourself to [ and here ] there is a standard that below which is unacceptable.”

The air in the space was nearly palpable, as we spoke about the importance of Jeraldyne [Blunden], James Truitte, Talley Beatty, Donald McKayle, Eleo Pomare, Luis Johnson, and Ulysses Dove, in her life. It was as if calling their names made them gather. That feeling brought forward for me the idea of integrity and ownership of one’s craft. How inspiring it was to sit with someone I consider a master as she talked about the masters that she was guided by. It felt like reading from libraries solely accessed by memories kept alive in her body. We discussed the transformational power of process in relation to Donald Byrd, as well as a few key moments with him in the studio, and how the landscape of dance has changed over time. She shared that she enjoyed both the definitive nature of dance from “back in the day” as well as the more explorative form it has taken on in modern times and credits Mr. Bryd with being the first she encountered to push dancers into that explorative space.

“To be sure of myself [ and ] to be honest in my delivery..to not just put something on” is what Sheri says she learned from the legend Jimmy Truitte himself, who she remembers as “stern” and “really funny.” He was a principal dancer with the Horton company, re-stager of Mr. Horton’s work, teacher of the purest form of the Horton technique, a 17 year resident instructor at the University of Cincinnati and DCDC, and a confidant of our founder. In regards to Jeraldyne she remembers her as a “driven nurturer [ and ] with a being like that you felt safe to delve into stuff, to try stuff [because ] you were being led by someone who cared.” She talked about how she will always remember traveling with her and sharing a hotel room as she adjudicated, eating at Mrs. Jeraldyne’s home, and her bouts of sudden sleep in the studio. She also talked about Jeraldyne’s successor Kevin Ward with much reverence too. We talked about how his legacy is marked by intellect and a propensity for merging the high caliber dancing DCDC is known for with education and content that stimulated the mind. “He’s a smart man…he’s a smart artist” she lovingly exclaimed. The two of them have been assisting in the archive process by providing metadata for many of the unidentified photos of the company. “it’s been cool [working with Kevin], every photo you see just brings back memories of different groupings of people as the dancers changed so it’s just fun. ”

Something that really touched me was when Sheri shared that it was a ritual of hers to wink at Jeraldyne’s picture which once stood in the main lobby. She would say good morning to her every day as she passed both photos. Later in that same stream of consciousness she shared that “sometimes watching y’all on the marley I think, Jeraldyne would be proud of this.” And though I had asked if she ever felt Jeraldyne’s presence in the studio, it was actually in that moment that I could feel her present with us. It gave me chills. But the most gripping portion of our interview came when Sheri spoke of triumph and loss and how dance has helped her through both.

“One of the greatest triumphs, and God I have been blessed that there have been a number, was being awarded the Bessie. That was one of my biggest triumphs and biggest surprises. I didn’t know that I had won.” She explained how months before
the ceremony Jeraldyne casually invited her to escort her to the Bessie awards,
to which Sheri agreed considering she was already scheduled to be in NYC
rehearsing with Complexions during that time. On the day of, Jeraldyne grabs Sheri from rehearsal and they both attend the ceremony anticipating the awardees.
It was as the award for best soloist was being announced that Jeraldyne turns to
a confused Sheri with a grin and says “Gotcha” just in time for Sheri to hear her name being called. She received several standing ovations including the next night when
she performed “Growth” the very solo mentioned in her award at BAM’s majestic theatre. It was truly a career defining moment but it was actually loss that tested her character most and brought out the artist that she truly is.

“Sorrow, loss that’s a whole ‘nother book right there.” And everything that came after that proclamation proved to be truly weighty. She talked about not only being the last surviving member of her immediate family, after the deaths of her parents and two older sisters, at 45 and 57, but also the death of Mrs. Jeraldyne. Her mother fell ill while she was overseas and she returned just in time to watch her take her last exhale. Her father suffered a myocardial infarction in the room just above her and she heard him collapse to the floor, she administered CPR and watched him fade from the world. What is remarkable to me is that in all three instances she chose dance as the vehicle of her catharsis. Just twelve hours after her fathers transition she performed Vespers at the Victoria Theatre, and oddly enough Vespers was also on the show she danced the same day of her mothers funeral. She even talked about dancing at Jeraldynes funeral and how she wasn’t sure she could but found the strength to do so.

“So yea I’ve had some sorrowful times but dance has always been there…it made it very cope-able for me…people would always tell me ‘why are you here? you know you don’t have to be here’ [but] I wanted to do that, otherwise what else am I gonna do, I can’t do anything. I’d rather be doing what it is that I do…dance is healing”

Sheri ‘Sparkle’ Williams is truly a remarkable woman whose life is intimately tied to this place I’ve called home for the past 8 years. I feel tremendously grateful for her vulnerability and willingness to speak on how DCDC has shaped her life. Her humility and confidence are a testament to the way in which ancestors and elders such as Jeraldyne Blunden, Talley Beaty, Eleo Pomare, James Truitte, Ulysses Dove and Donald McKayle have never let her and the subsequent artists of DCDC falter on their own integrity. She ended the conversation with the notion of hoping that dancers to come can recognize the work she has done in order to open the door for us to step in and take the reins and not limit ourselves in what we can do. She gave a final thank you to those who poured so much love into her over the years and reminded me that, “this isn’t ‘only’ dance. So put your best foot forward always and enjoy it like I have.”