It has been nearly a month of working in the archives at Dayton Contemporary Dance Company (DCDC) and it has been an experience like none other. I had no idea where I would begin this vast undertaking of assessing all the materials, diagnosing areas of development and concern, and prescribing solutions to the problems as I saw fit.

Our collection, much like those of many other institutions in the early stages of their archival journey, was mixed in with a host of other things: props, material for educational programming, old instruments, coolers filled with warm soda and plastic water bottles, remnants of flooring which has been replaced, marquee posters standing 3-4 feet high, cleaning supplies, filing cabinets stuffed to the brim, and much, much more. Initially, I found myself shocked by the organized chaos of it all. I knew that our precious material needed to be separated from the general storage material for fear of anything being lost or damaged. I started sifting through and rearranging boxes and came upon a crate with the words “legal pads with notes” taped to the top of it. My curiosity got the best of me and I decided to begin here. 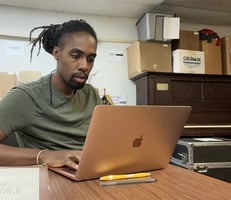 I opened this very official box to find a slew of legal pads, uncategorized, unlabeled, and strewn all over the inside. The box itself was padded and perfect for protecting the contents, which eased my anxiety, so I decided to begin organizing them. As I looked through the legal pads for information about their contents, the metadata, I noticed names of iconic works in the DCDC repertory: Children of the Passage, Rainbow, Stack Up, Beyond a Cliff, Las Des, Ostrich, Vespers, and Time Piece to name a few, many of which I had also performed as a dancer in the company. The names of dancers like Gary Harris, Terrence Greene, Sheri Williams, Dawn Wood, Deshonna Pepper, Shonna Matlock, Shana Bloodshaw, Calvin Young, and Cecil Rhodes riddled the pages with directives to “move leg on music”  or “move solo downstage.” Anecdotes about choreographers like Garth Fagan, Mike Malone, Bebe Miller, Dwight Rhoden, Ulysses Dove, Ron Brown, Donald McKayle, Donald Byrd, and Dianne McIntyre were included, with an occasional phone number or address and a note to “give [so and so] a call.” There were references to class schedules in which the esteemed James Truitte, first generation student of Lester Horton, would teach on Fridays, Gregory Robinson, esteemed soloist with the Dayton Ballet, taught ballet on Wednesdays, and the other classes were taught by dancers such as Terence Greene, Gary Harris, and Dawn Wood.

Dancing is a constant system of refinement. Artists work for years at improving the craft of dance techniques such as ballet, modern, jazz, etc., but they also work at perfecting the execution of choreography. Essential to this process is what we call “notes,” wherein an outside eye, usually the 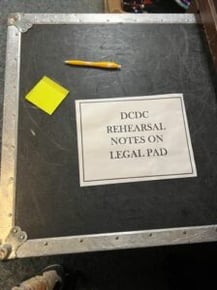 Artistic Director, choreographer, or Rehearsal Director, watches a cast of dancers perform choreography and offers feedback as to how the work can be more effective. Notes are taken every time a work is rehearsed in the studio and on stage. They can offer a behind-the-scenes look at the work it takes to produce the high caliber dancing DCDC is known for. For me as a fellow dancing artist, finding a box of notes was like stepping into a time machine whose controls and jargon I was all too familiar with. It was fascinating to see this process be handed down so seamlessly from one generation to the next. We, the dancing artists of DCDC’s 53rd season, still take notes in the same way and glean insight from the trusted voice in the front of the room. I felt connected to the artists that toiled to perfect these dances and their dancing bodies. It gave me solace to know that we are all united in our love of dance and the pursuit of virtuosity.

After speaking at length with former dancer turned Director of Education Programing, Shonna Hickman-Matlock, I understood that not only had DCDC’s founder Jeraldyne Blunden written in the pads, but so had the second Artistic Director, Kevin Ward, current Artistic Director (and daughter of our founder) Debbie Blunden Diggs, as well as a host of trusted dancers such as Dawn Wood, Karen Moon, and Michael Grooms. On more than one occasion, I came across places where Jeraldyne treated her legal pads as both a working record of notes and as a space to work out the language and thoughts around particular works. For instance, I read things like, “Racism is constant… understand race, class, and culture” in a pad from 1988. In one pad from 1998 she documents her day-to-day experiences with headaches and having to continue to attend meetings, watch rehearsal, and care for her husband, whom she called Blunden, and son Derek. She often would record her visions and goals for the company, saying things like:

“My take on DCDC is DCDC is a repertory company that radiates artistic excellence and total understanding in all areas through their retrospective of historical company works as well as their far-reaching responsibility toward each growing artist (choreographer/dancer).”

Some time between 1998 and 1999, shortly before she passed, she reflected on the creation process of Children of the Passage, writing: “the creation of a new work is always an intimate dialogue between the choreographer and the dancers, wherein the choreographer attempts to get the dancers to realize the vision in his/her head. More than just the replication of movement [the process will transport all participants on a journey whose maps include trust and instinct] along the way.”

She continued in another pad:

“As we diligently prepare for the upcoming winter season with our new offerings, we will be premiering three new works, ‘Phases’ choreographed by long-term company member Terrence Green, 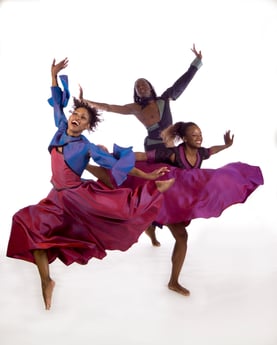 ‘Job's Table’ choreographed by our own associate artistic director Kevin Ward and, ‘Children of the Passage’ choreographed in a unique collaboration between Donald McKayle, master choreographer, and Ron Brown a young talented artist of the new generation. We are convinced we have a 30th anniversary sure fire success. Children of the passage was commissioned by the African-American museum and cultural Center as a part of an exhibit on the tradition of black dance in America. DCDC is an outstanding dance company proving to be head and shoulders above the many companies that appeared on the International Association of Blacks in Dance conference showcase in Denver Colorado this past weekend. DCDC is also the home of probably one of the finest dancers in the world, Sheri Williams. The combination of unbeatable dancers and a first class repertory can be our ticket to success. In our efforts to build a strong organization let us not lose sight of the fact that our artists, the dancers, are the heart and soul.”

In regard to the above mentioned Job’s Table, formerly titled Martyrs Road by Kevin Ward, she writes: “drawn from events surrounding the terrorism and murders of African Americans in the 50s and 60s, this work explores the ultimate destruction of an American Family, who because they try to live their lives with dignity and freedom, are targets of hate.”

In an earlier note to her son, she writes: “Derek it was two years and one day ago that I lay down, lapsed into a coma for two months, survived a very complicated illness of which no one seems to know about or what it was, and today I sit here…”

Some time in 1993, she wrote: “I've learned that if your life is free of failures you are probably not taking enough risk. It is all right to enjoy your success but you should never quite believe it! A good reputation is a person’s greatest asset. I have learned that it pays to believe in miracles and to tell the truth I've been involved in one.”

And later in 1994 she wrote: “[it is] Very difficult to sit back and look at my accomplishments with DCDC separated from who I am as a person. Most things I have done or set out to do, has been from my own great need to do it or feeling extremely passionate about the project or event. Everything has been because I have had extremely competent and enthusiastic support”

Though it was nice to read about familiar works through the endless lists of notes scattered amongst the legal pads, I cannot express how intimate an experience it was to read the handwritten thoughts of our founder. I joined the company 14-15 years after Jeraldyne had passed and had only felt connected to her through the energy that animates our work environment and the stories told by all those she touched; my connection was secondary at best. Fortunately for me, I have had the pleasure of talking at length with and being choreographed on by both Kevin Ward and Debbie, but now I finally feel personally connected to our founder as well. Jeraldyne was an incredibly driven, passionate, and visionary woman who set out to establish a high power, high quality Black dance company rooted in the Midwest. She not only succeeded in that endeavor, she has also succeeded in inspiring others to carry on her legacy and the legacy of virtuous Black dance which reaches communities both domestically and abroad. I am thankful to be a part of that effort.